9 triptychs based on Slavs mythology 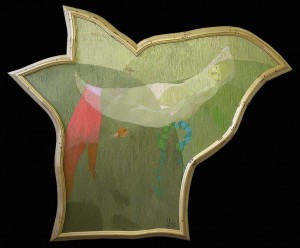 I was always passionate about mythologies and old cultures: they are the base of modern culture and art, and had a holistic approach of the world. One of these cultures is the Slavs mythology. I propose to the spectator to discover the paintings series based on the Slavs mythology motifs. This work took 10 years (including restoration) to complete. These triptychs are jointed painting on canvas with wood sculpted frame based on the painting’s subject. Each triptych has a commentary.

Slavs had a perception of the world as tree united parts. The Visual world (Yav), the Right world (Prav) and Imaginary word (Nav). Man lived in Yav, the visual world. In the celestial word Prav, God Svarog defined the rules. The world of imagination Nav was inhabited by mysterious creatures.
The triptychs present all tree worlds, the central one pictures Yav, the darker section presents Nav and the lighter paint, Prav.

I did not intend to illustrate the myths, but what was really important to me is an attempt to picture an era when man lived in complete with nature, oblivious of the fact.

The art language from the XXth century takes historic subjects and it’s a time machine for me. Using art, we study mankind today and its ancestors. This painting series is also called “Man: Happiness and Tragedy”