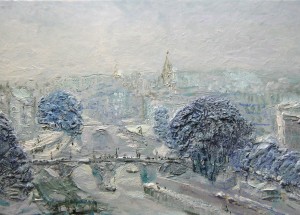 Pont Neuf. The oldest but still preserved bridge in Paris crossing the Sena-river. This bridge crosses the Western part of the Cité Island and was built as a monumental rock construction with 12 spans, that has built to join the western part of the island to both Sena-river boarders. It was the first bridge of the French capital which had no houses on it. Nowadays the Pont Neuf is one of the Paris symbols.